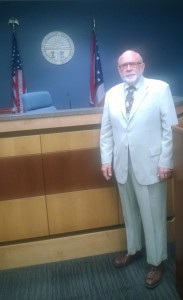 Whether or not a homeowner intends to stay in his home, paying in full the total amount due to the Bank either in cash in one lump sum is a transaction known as a Payoff.  A Payoff may be the result of receiving a large sum of money from the resolution of an insurance claim or a government entitlement claim or a fortuitous sale in a greater amount than the amount of all the claims of the lienholders.  If the entire amount is not paid, then this transaction is not a Payoff.  If the entire amount is paid, then the homeowner is free finally of his Bank.

DEFEND!       Every homeowner is offered the privilege of defending their home in our judicial system, and each homeowner should consider doing so.  The third reason a homeowner should DEFEND! is simple- it is economically cautious.

An example may be helpful- In one lawsuit litigated for years in which I was involved the Homeowner finally decided to pay the full $10,000 demanded as due by the lienholder who had already completed the foreclosure process and was attempting to evict the former homeowners.

These homeowners believed obtaining title to their home again by a Payoff was worth the cost. Without an attorney defending the post decree foreclosure, the lienholder would have ignored the homeowner and sold the house for a profit greater than $10,000.

I recommend each home owner consider opposing his Bank’s attempt to foreclose by using an attorney to file an answer and where appropriate a counterclaim.